serving northumberland, tyneside and beyond!

Every Replacement Boiler we fit is always Power Flushed

What happens during a Power Flush?

System Flushing is now a requirement under Part L of the Building Regulations when replacing an old boiler with a new Energy Efficient condensing boiler.

There are some issues to be aware of, but in our experience the benefits of having a Power-Flush far outweigh the risks.

What deposits might you find in a heating system? Typically in the manufacture of radiators you will have iron filings, oil, grease and sludge deposits. These deposits have a detrimental effect on the working parts of any boiler and reduce the life expectancy of any boiler. This can result in breakdowns such as heating pumps etc.

Professional Power-Flushing services will flush the system in a multi-directional manner, pumping water first in one direction and then in the other direction. This creates a swirling motion within the heating system and helps to agitate particles and debris in the system. It is then possible to drain this contaminated water to remove the debris and unwanted sludge build-ups. To assist this process, specialist chemicals are used to help break down the sludge and iron deposits.

Power-Flushing can, however, expose potential unseen problems in your heating system which can surface either during or soon after a Power-Flush. Leaks from weak plumbing joints or radiators with pinholes may be caused by corrosion. These leaks would have previously been plugged by the debris and sludge within the system, and can result in additional costs, such as the replacement of radiators, or the fitting of new joints. These additional costs are not normally included in the cost of having the Power-Flush done. However the risks of this are relatively low, with some installers reporting that around 1 in 70 radiators generated leaks after a Power-Flush. So be aware that power flushing may result in highlighting weak areas in your system which need repairing.

It is also a recommendation under part L of the Building Regulations that Thermostatic Radiator Valves (TRV’s) are fitted to all bedroom radiators. Although this not a full legal requirement, it is prudent to consider having this done at the same time as the Power-Flush, while the heating system is drained.

Once the power flushing is complete the heating system has chemicals introduced to stop any further corrosion of the system.

A professional Power-Flush is a thorough cleansing of your central heating system, and nomally results in substantial improvements in efficiency which can, in turn, lead to a reduction in your gas bills. There are other reasons why it is a good idea to have your system Power-Flushed, including extending the life of a new boiler and even a legal obligation!

The two images below show a thermal image of a typical radiator before and after a Power-Flush. 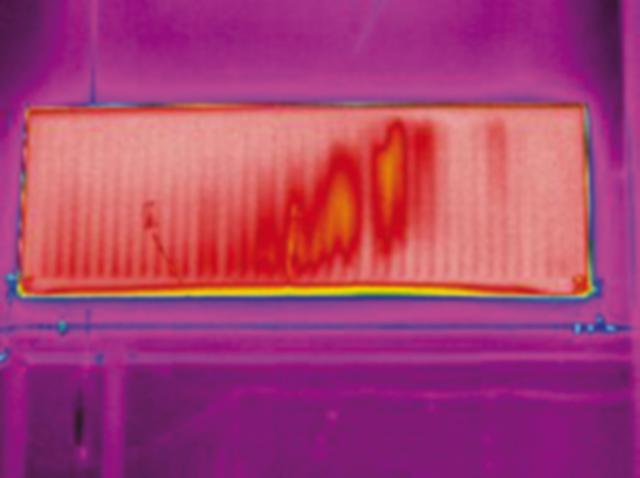